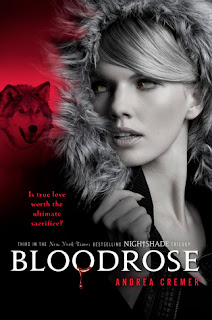 But now that the final battle is upon her, there's more at stake than fighting. There's saving Ren, even if it incurs Shay's wrath. There's keeping Ansel safe, even if he's been branded a traitor. There's proving herself as the pack's alpha, facing unnamable horrors, and ridding the world of the Keepers' magic once and for all. And then there's deciding what to do when the war ends. If Calla makes it out alive, that is.

Opening Sentence: I could hear each heavy beat of my heart.

Oh.... my broken heart.... Andrea Cremer what the heck did I ever do to you for you to end this series this way. Bloodrose had the most disappointing and yet heart breaking ending to a series that I have ever read.

Now let me say, going into this book I was already a little sad. I am always sad when reading the last book in a series that I have genuinely enjoyed. Yet, I pushed all these feelings aside that way I could enjoy my last trip with Calla, Shay and the gang... and for most of the book I was really enjoying myself. But when it got to the ending.... I was like this....

I mean, look how sad and heartbroken you have made Buttershy Ms. Cremer. I was about ready to throw the book at the wall.

How do you take us throw 3 books with these characters and then give them nothing but a CRAPPY ending? Because that was truly what it was in my opinion. The 2 sweetest (most gentle) characters get killed off. The b****est of characters (while doing a good thing at the end of the book) gets one of the best endings. And then... the epilogue of the book, isn't even told from the POV of Calla like the rest of the series was. It was told from the POV of the character from the series that I cared the least about.

And while I will freely admit that I was rooting for Shay the entire series, I still can't believe what happened to Ren. While I could see from a mile away what was going to happen to him, I am still SOOOO disappointed in how it happened. It seemed is pointless and cold-hearted the way it went about happening. It just ticked me off... and I am plenty sure that all the Ren fans out there weren't pleased with it either.

Another thing that annoyed me (and as you can see there were a lot by the end of this book), was how separated a lot of the characters ended up being. Ms. Cremer put a lot of time and effort into forming these strong bonds of friendship and caring between the Searchers and the Guardians and then at the end, they were just ripped apart like they meant nothing. And for me, who puts my friends above almost everything, this just didn't set well with me at all.

You know what I'm going to do. I'm going to make up my own ending to the story. Where everybody lived happily ever after and they all got to remain friends. Sounds so much better to me.

Agreed! I hated that the author took the easy way out rather than making though decision. It had the worst ending I've ever read.
But do you want to know something else too? The character that died did come back to life in the new novella. It's a major cliffhanger but at least there is still hope.

so so so agree. I feel as if she just took the easy way out and then made it worse. So angry, I felt as if your review truly hit on what I was feeling. I hated the ending and now it's so tainted the rest of the books.