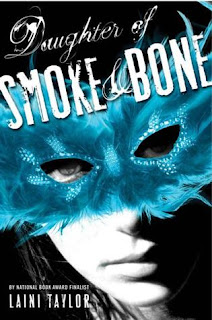 AROUND THE WORLD, black handprints are appearing on doorways, scorched there by winged strangers who have crept through a slit in the sky.

In a dark and dusty shop, a devil's supply of human teeth grows dangerously low.

And in the tangled lanes of Prague, a young art student is about to be caught up in a brutal otherworldly war.

MEET KAROU. She fills her sketchbooks with monsters that may or may not be real; she speaks many languages - not all of them human; and her bright blue hair actually grows out of her head that color. Who is she? That is the question that haunts her, and she's about to find out.

Opening Sentence: Walking to school over the snow-muffled cobbles, Karou had no sinister premonitions about the day.

Daughter of Smoke & Bone by Laini Taylor was a true joy to read. While the premise behind the love story wasn't all that original (forbidden love, from opposing sides of a age old war), it was told in a completely unique fashion.

Daughter of Smoke & Bone shows some of the best world building I have read about in a book (or series). It really made me feel the world that Karou found herself in. Even the world of Elsewhere felt absolutely real to me. As did the creatures that make up that world. You can see that there is good and bad on both sides and yet at the same time, each side can only see the worst in one another. And while there was some explanation as to why the war in Elsewhere, I can't hope but feel that there is more to the story that Ms. Taylor hasn't revealed to us yet. After all, Karou and Akiva seem to not only be forbidden lovers, but soul mates at the same time. Like they keeping finding each other to love one another, even though they are not supposed to. I don't believe in coincidence.

I enjoy the character of Karou. While often did a lot of rash things, she was still completely loyal to those that she loved and saw as family. And she was just curious enough to try and figure out what was being kept from her. Even though when she does find out, I have no doubt she wishes she could take it all back and just have her family back.

I loved the build up between Karou and Akiva's love. Yes, they do fall for each other pretty fast, but once their past is finally revealed to us... It is just totally heartbreaking and I couldn't help but cheer for their love to overcome it all. Of course the ending of the book, doesn't leave Karou and Akiva in a good place. It leaves them ripped about and grieving (and us wondering how the heck they will ever ~Karou at least~ be able to love each other once again). If I could have changed anything about this book it would have been the ending, yet at the same time I can understand how it was necessary to start us on book 2 in this series and see where Ms. Taylor takes us next. And from the sound of it, it is going to take place mostly in Elsewhere, so I can't wait to find out more about this place that I have come to find extremely interesting.

The main characters were strong. The secondary characters were supporting... LOL. Daughter of Smoke & Bone while rather slow at the beginning was still a great start to a new series. It has completely enraptured me within it's pages. But I also love how Ms. Taylor made it just different enough to leave her readers wondering, but not so different as to make it unbelievable. I mean, why can't there be a parallel world, where these creatures roam and exist?

I can't wait to get my hands on Days of Blood & Starlight to see where this enchanting story takes me next.