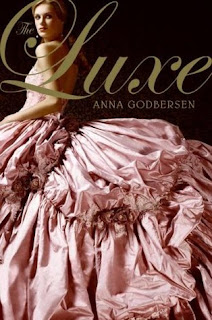 Beautiful sisters Elizabeth and Diana Holland rule Manhattan's social scene. Or so it appears. When the girls discover their status among New York City's elite is far from secure, suddenly everyone - from the backstabbing socialite Penelope Hayes, to the debonair bachelor Henry Schoonmaker, to the spiteful maid Lina Broud - threatens Elizabeth's and Diana's golden future.

With the fate of the Hollands resting on her shoulders, Elizabeth must choose between family duty and true love. But when her carriage overturns near East River, the girl whose glittering life lit up the city's gossip pages is swallowed by the rough current. As all of New York grieves, some begin to wonder whether life at the top proved too much for this ethereal beauty, or if, perhaps, someone wanted to see Manhattan's most celebrated daughter disappear....

In a world of luxury and deception, where appearance matters above everything and breaking the social code means running the risk of being ostracized forever, five teenagers lead dangerously scandalous lives. This thrilling trip to the age of innocence is anything but innocent.

Opening Sentence: On the morning of October 4, 1899, Elizabeth Adora Holland - the eldest daughter of the late Mr. Edward Holland and his widow, Louisa Gansevoort Holland - passed into the kingdom of heaven.

I have to say, I'm pleasantly surprised. I avoided reading this series for years. Honestly, I just didn't think that I would enjoy them. Historical books for me are either a hit or a miss and the last few that I had read, had been big misses for me. Once, I finally broke down and got The Luxe from my local library, I actually couldn't wait to start reading it. There was something about it that was all of a sudden calling my name and I ended up skipping it ahead of some books and starting it before schedule (lol). And I couldn't put it down....

Oh, what a tangled web of lies, deceit, gossip and heartbreak Anna Godbersen has weaved for us within this book. I actually had to but the book aside at one point and make a list. I put all the names of the main characters and connected them to: who loved who, who was backstabbing who, etc., just so that I could keep everything straight.

The Luxe is told from 5 different POV's. 4 girls and 1 boy. And while I have read a book told in 5 different POV's before and found it rather confusing, Anna did it in a way that it was absolutely essential to the story, to be told by all of them. Each character is so destintely different from one another, that there is no way to get them confused (or be confused about whose POV you are currently residing in).

While I didn't really enjoy the character of Elizabeth, she was just way to weak willed for me throughout most of the book, she did finally win some credit for herself after what she did at the end (even if I did see it coming from practically the beginning of the book). Penelope played a good scorned lover, but there is no love lost for me on her. The same for Lina, who was just a back stabbing lady, who couldn't be happy with what she had, she wanted it all and more. My favorite female in this book by far would have to be the little sister, Diana. She was full of life and not afraid to try and life her life the way she wanted it, despite what other may have thought of her (she reminded me a lot of myself). I hope to get more depth with Henry's character, but for now he is just floating down the middle for me, I neither love nor hate his character.

I must also give Anna props on doing her research, because I couldn't really find anything out of place that made me feel like I wasn't back in time. Like I wasn't in 1899, because from the very first page, I felt like I was traveling back to the past and experiencing these ladies lifes as they struggled to overcome everything and have the world at their beck and call.

I already have Rumors (got it from the library today) waiting on myself to be read, to see what happens next in this exciting series. Who will back stab who next? Who will try to ruin who next? Who will fall in love with who next? Will Elizabeth be found? I can't wait to find out. 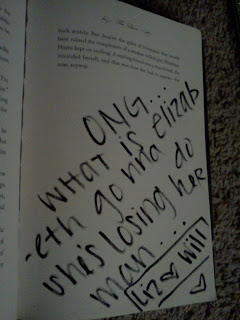 The joys of a library book.
Crazy how people feel they must write in a book that doesn't belong to them.
LOL.

So glad you enjoyed it. This is one of my favorite series ever.

I have been putting off reading this series too...I'll add it to my reading list :) As a librarian I have to say that writing in a library book is bad...but that writing is pretty cool-it's nice to see people getting so into the characters and story!

I need to get around to getting this book, I've had Rumors on my shelf for a while (found it on sale for $1 and I can not pass up a sale even though I knew it was a sequel). I laugh every time I see the crazy things people write in things that aren't theirs.