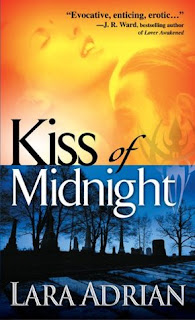 INSATIABLE DESIRE. ENDLESS SEDUCTION.
ONE TOUCH IS JUST THE BEGINNING.


He watches her from across the crowded dance club, a sensual black-haired stranger who stirs Gabrielle Maxwell's deepest fantasies. But nothing about this night - or this man - is what it seems. For when Gabrielle witnesses a murder outside the club, reality shifts into something dark and deadly. In that shattering instant she is thrust into a realm she never knew existed - a realm where vampires stalk the shadows and a blood war is set to ignite.

Lucan Thorne despise the violence carried otu by his lawless brethren. A vampire himself, Lucan is a Breed warrior, sworn to protect his kind - and the unwitting humans existing alongside them - from the mounting threat of the Rogues. Lucan cannot risk binding himself to a mortal woman, but when Gabrielle is targeted by his enemies, he has no choice but to bring her into the dark underworld he commands.

Here, in the arms of the Breed's formidable leader, Gabrielle will confront an extraordinary destiny of danger, seduction and the darkest pleasures of all....

In a lot of reviews that I have read, they have all shared one common thread. That Kiss of Midnight and in fact the whole Breed Series is a rip off of The Black Dagger Brotherhood Series. Having never read the BDB Series (I have the first book on reserve at my Library), I went into this book without any prejudices. And I really enjoyed it.

This was truly a steamy book to read. There were plenty of love scenes which I have been craving for in books lately.

Gabrielle is a fun heroine to read about. She didn't leave me begging for me like a lot of other heroines have. She was brave, strong and wasn't afraid to go after what she wanted; Lucan. She also wasn't afraid to take what she wanted; Lucan's body. LOL. The chemistry between Gabrielle and Lucan was off the charts and could be felt practically from the moment that they meet.

Lucan was also an enjoyable character to read about. He had a lot of issue's plaguing him, which made him an extremely complicated character to get to know. But Gabrielle didn't let this fact come between them. There are countless times that Lucan tries to push Gabrielle away, saying that it is for her own protection (and sometimes it is), but Gabrielle wasn't an insistent little vixen and she was able to eventually break him down.

Besides loving the characters (I can't wait to get to read the other steamy guys stories), I loved the story behind the characters. Lara Adrian has a good mythology behind her characters. She obviously understands where they are all coming from. It is the first time I have read about Vampires originating from Aliens (and outer space), but it was a really thought out and logical way to go with the mythology of Vampires. I enjoyed the idea of the breedmates as well. Even if it did kind of limit the choices that the Breed Warriors would have with their eventual mates. It is easy to see how these men (all vampires are men, no women born into them) can hide within our society without us finding out about them, unless we are one of the Breedmates (the few selected human woman who can marry and mate with the Breed men).

Overall, this was an enjoyable story. While there was danger and bad guys involved, I didn't feel like it was over the top and impossible like I do in a lot of books lately. While the bad guys were an obvious threat, I felt that Adrian still effectively blended them (and their need to be there) into the story line that she is weaving. I look forward to getting my hands on Kiss of Crimson to see where she takes us now. I also look forward to getting to know more about the Breed Warrior named Dante and to see how steamy his book is.

This is a series I know that I will be looking forward to continuing.