Review: What Happens Next 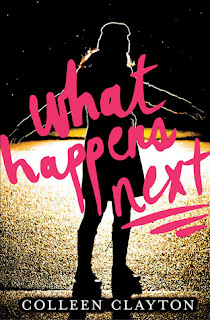 Before the ski trip, Cassidy "Sid" Murphy was a cheerleader (on the bottom of the pyramid, but still...) and a straight-A student, with two of the best friends a girl could ask for.


When Sid finds herself on a ski lift with hunky local college guy Dax Windsor, she's thrilled. "Come to a party with me," he tells her, but Dax isn't what he seems. He takes everything from Sid - including a lock of her perfect red curls - and she can't remember any of it.


After the ski trip, Sid is an insomniac and an obsessive late-night runner, unable to relate to anyone.


Caught in a downward spiral, Sid drops her college prep classes and takes up residence in the A/V room with only Corey "the Living Stoner" Livingston for company. But as she gets to know Corey - slacker, baker, total dreamboat - Sid finds someone who truly makes her happy. Now, if only she could shake the nightmares, everything would be perfect....

Opening Sentence: It's four in the morning and I'm sitting on my porch steps waiting for my friends.


This review is very personal to me.
It contains some very personal information.
If you don't like to see this in a review, then you should stop reading this now.

I picked up this book because it got a really good review from a blogger that I stock. Her reviews have led me to read so really good books so I thought this would be a good read as well. But boy was this something else to read. While reading this I ran through so many different emotions, the most common being: Annoyance and down right anger.

I am not saying this was a bad book to read, not at all. But it was a book that was extremely difficult for me to read. I tried my hardest to be sensitive to the topic that was being discussed. Rape is a hard topic to be covered. A lot of times it is like a voodoo word that people will purposely skip over. I understand this all. However, the way that it was handled in this book, the way that Sidney handled it, by trying to brush it all under a rug, not tell anyone... but it still getting the best of her and herself allowing it to affect all areas of her life and then blaming the guy for taking everything from her... This struck a cord with me.

Early I warned you all that this would be a very personal review. You may be wondering why I said this... It is because I have been a rape victim myself. So I can understand where Sidney is coming from. In a way at least. My experience was from a family member and I had to see him on a constant basis. I was only 12 years old when it happened to me and no I didn't tell anyone what happened. I was a scared little girl. I looked up the statics on rapes and it is kind of shocking to see that about 60-70% of rapes do go unreported.

I kept telling myself over and over and over again that I needed to be more open to what was going on in her head. Everybody deals with things differently. But no matter how many times I told myself this, I couldn't handle the fact that she kept blaming the guy that did this to her. Yes, it is a TERRIBLE thing that happened to her, but you can't just lay down and allow yourself to be a victim of the crime as well.

I wanted to see some fight. Some indignation that this guy should dare to take something so very precious from her. But I didn't see any of this in the book. So instead I started to focus on everything else. The relationship that was slowly build upon between Sidney and Corey (the slow build up of trust between them was inspiring to read). The peaks we got into the relationship between Sidney and her mom (which I must say is the best mother/daughter relationship I have ever read in a book). How her mother struggled to raise her. How Sidney and her two girlfriends were eventually able to make up and then ended up being her biggest support system. All of these things are what make the book easier for me to read. It wasn't until the very end, when the truth finally came out that you finally saw a fight in Sidney. This is also when she finally got to see that even those this terrible thing happened to her, the people that she loved and loved her back, still stayed by her side.

This wasn't a bad book. It was just a really hard book for me to read because it was so very personal to me. But I would still recommend it to people to read about because it is an emotionally moving book as well.

Cassie. I'm so sorry--but I bet you don't want me to focus on that. I loved your review--personal moments don't hurt reviews for me, they make them better. Your review totally makes me want to read this book--good mother/daughter relationships are the best!