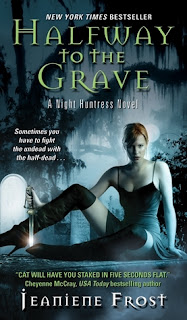 
Half-vampire Catherine Crawfield is going after the undead with a vengeance, hoping that one of these deadbeats is her father - the one responsible for ruining her mother's life. Then she's captured by Bones, a vampire bounty hunter, and is forced into an unholy partnership.

In exchange for finding her father, Cat agrees to train with the sexy night stalker until her battle reflexes are as sharp as his fangs. She's amazed she doesn't end up as his dinner - are there actually good vampires? Pretty soon Bones will have her convinced that being half-dead doesn't have to be all bad. But before she can enjoy her new found status as kick-ass demon hunter, Cat and Bones are pursued by a group of killers. Now Cat will have to choose a side . . .  and Bones is turning out to be as tempting as any man with a heartbeat.

Halfway to the Grave was a really enjoyable book to read. Ms. Frost has created a truly entertaining and enjoyable ride. She has created unique and quirky, spunky and gusty characters.

Cat is a half-human, half-vampire, who kills vampires for a living while going to College during the days. She's trying to eventually find her father, the man who ruined her mother's life and helped to create her in the process. However, even though she has been relatively success to date with killing some vamps, one slip up and she is captured by a vampire hunter, who happens to be a vampire himself, Bones to be more accurate.

It is at this point that the book starts to get really interesting. The chemistry and witty banter between Cat and Bones practically sparks off the pages from their first meeting, and as they get closer to one another, those sparks only get sharper.

The book, while at times it could be a little slowly, still worked up nicely and there was plenty of action as well. Watching Bones build up Cat as a hunter was the best and to see their affection grow was oft times more entertaining and hilarious then anything else. It was obviously from the first that Bones was into Cat, but it took Cat a lot longer (with her inborn hatred of all vampires) to get over Bones being one and her to see the man behind the vampire.

The motives behind the "bad" guy in this book, was obvious from the very beginning and it was easy to point out the good side and the bad side. But that was refreshing as well. In a lot of books, I keep finding the problems the good guys have to get over in the books seem to be "overwhelmingly" against them succeeding, but not so in this book. You knew Bones and Cat would over come anything, as long as they had each other.

And then just as they over come the problems facing them, something comes up and budges in the way of their happiness... and Cat is convinced she must give up her happiness with Bones to protect him. But is this really the "end" for them. I highly doubt that. After all, Bones did promise to find her if she ever tried to run away.