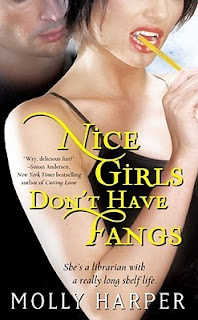 Maybe it was the Shenanigans gift certificate that put her over the edge. When children's librarian and self-professed nice girl Jane Jameson is fired by her beastly boss and handed twenty-five dollars in potato skins instead of a severance check, she goes on a bender that's sure to become Half Moon Hollow legend. On her way home, she's mistaken for a deer, shot, and left for dead. And thanks to the mysterious stranger she met while chugging neon-colored cocktails, she wakes up with a decidedly unladylike thirst for blood.

Jane is now the latest recipient of a gift basket from the Newly Undead Welcoming Committee, and her life-after-lifestyle is taking some getting used to. Her recently deceased favorite aunt is now her ghostly roommate. She has to fake breathing and endure daytime hours to avoid coming out of the coffin to her family. She's forced to forgo her favorite down-home Southern cooking for bags of O negative. Her relationship with her sexy mercurial vampire sire keeps running hot and cold. And if all that wasn't enough, it looks like someone in Half Moon Hollow is trying to frame her for a series of vampire murders. What's a nice undead girl to do?

Opening Sentence: I've always been a glass-half-full kind of girl.

Nice Girl's Don't Have Fangs started off as a really cute book. It drew me in practically from the beginning. I really enjoyed Jane's tone of voice and her sense of humor. Gabriel was a strong male lead and complimented Jane really well. He was obviously very attached and attracted to her and only wanted the very best for her, even while someone was trying to harm her and blame some murders on her.

Jane starts off by losing her job, getting head-over-heels drunk, flirting with a gorgeous stranger, getting shot and killed and then being revived as a vampire by that aforementioned gorgeous stranger. Definitely an interested and hard way to spend a day. But Jane takes it in amazing stride. I mean after all, it's not like vampires are a myth any more. Not after one came out of the closet and sued his old job to get it back and give him the night shifts he had been requesting. That was definitely an interesting take on the vampire myth. And always nice to receive a vampire welcome banquet with a starter kit that every new vampire will need to survive.

As things start to slowly head up between Jane and Gabriel they also start to look down for her. There is some one out there killing vampires... and they are trying to pin it on Jane. We are dragged into a web of lies and confusion and we have to figure out who it is that is playing these games.

However... about half way into the book. It starts to get a little to sugary sweet for my tastes. Like I said, I liked Jane's character, but she was way to reserved and to hesitant on taking risks. Especially with Gabriel. Another thing was, when they do finally have some "sexy" time together, it's during a huge fight and they are kind of doing it on top of broken glass... This just totally didn't fit in my head, it just didn't work for the story.

Besides the "too sugary" part of the books, I personally, found it a little to easy to figure out who was doing the killing and trying to pin it on Jane and exactly why he or she was doing it. Mind you, it's for a rather "weird" (yes that is my way of saying stupid) concept for a vampire want. But let's just go along with it.

All together, while I had some issues with the book, I did enjoy it and do look forward to the next one in the series.

I always thought that this looked like a fun series and have wanted to try it for awhile. I am glad that you were able to enjoy it overall, despite the issues. Great review.