Review: One Foot in the Grave (Night Huntress #2) 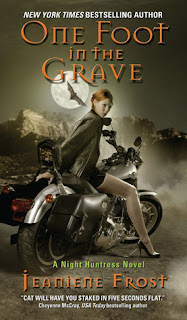 You can run from
the grave,
but you can't hide...

Half-Vampire Cat Crawfield is now Special Agent Cat Crawfield, working for the government to rid the world of the rogue undead. She's still using everything Bones, her sexy and dangerous ex, taught her, but when Cat is targeted for assassination, the only man who can help her is the vampire she left behind.

Being around him awakens all her emotions, from the adrenaline kick of slaying vamps side by side to the reckless passion that consumed them. But a price on her head - wanted: dead or half-alive - means her survival depends on teaming up with Bones. And no matter how hard she tries to keep things professional between them, she'll find that desire lasts forever... and that Bones won't let her get away again.

Opening Sentence: I waited outside the large, four-story home in Manhasset that was owned by a Mr. Liam Flannery.

I started One Foot in the Grave right after finishing the first book in the series, Halfway to the Grave and I must say I enjoyed this book even more then the first.

It started off suspenseful. To see how Cat was now... after 4 years had gone by since the first book ended. The last book ended with her running away from Bones (for his "safety") with her mother and joining a secret, vampire hunting group. And she is still with this group in this book. But right from the beginning all I could think about was... how were her and Bones going to end back up together, and how would their first meeting go after being away from one another after so long.

Why Ms. Frost, you did not disappoint me.

Cat and Bones reunion was absolutely hilarious (even funnier then their interactions in the first book). I must say the whole "Chris Pin" part was the funniest in the whole book... I couldn't stop laughing for a while.

I am appreciative that when Bones and Cat finally reunite, it doesn't take over half of the book and that Cat was smart enough to know that she still loved Bones and probably always would. That she didn't fight her feelings forever (that would have just been a freaking headache).

The issues that Bones and Cat faced, were even bigger and troublesome then in the first book. And a lot closer to home as well. They had to learn how to work together even more then they did in the first to overcome the "bad" guys. Cat even tracks down her daddy in this book. Who isn't really grateful to have been found.

And there is a shocker at the end of the book that I really didn't see coming but thoroughly enjoyed. I loved how Bones came to Cat's rescue.

I can't wait to start reading At Grave's End, the third book in this series and to see where Ms. Frost takes us next.

This is my favorite PNR series & I love Cat&Bones. They are the best freaking couple ever, its been a while since I read this series, I need to reread it again. I'm so glad you are enjoying it. Great review :)

I just recently added the first one to the series on my TBR list. Good to know that the second book is so good. Thanks for the great review.

I have been told by countless ppl to read this series. I am interested in it because I saw your reviews on other books in this genre, and this series received the most praise from you (and a lot of other ppl) great review.
I rarely read books in this genre and dont know why I dont. I have enjoyed what I have read.
I need to put the dystopians and zombies down and pick up this series.
New follower :)