HI LOVELIES!!!! I am so excited to be one of the stop's for the Blog Tour of Phoebe Pope and the Year of Four by the lovely Nya Jade. This Blog Tour is being hosted by Giselle @ Xpresso Book Tours. Today I have the great pleasure to bring you not only my review for Phoebe Pope and the Year of Four but also an amazing Author Interview with Nya. Enough with my ramblings go check out the awesomeness below. 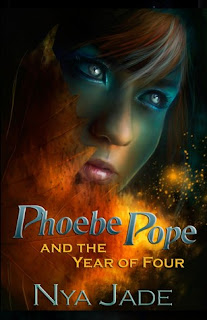 
The students of Green Lane Academy roam their halls unaware that below their manicured campus exists a prestigious school of an entirely different kind . . .


Sixteen-year-old Phoebe Pope has enrolled at the Campus Below: a spy academy for shape-shifters hidden deep beneath the grounds of a boarding school whose humans unknowingly protect it. There, thanks to a carefully planned schedule, she leads a double life: spy trainee Below and normal teenager Above.

As if two course loads, concealing a secret power she alone wields, and coping with her father’s recent death weren’t enough, Phoebe finds herself developing major feelings for actor and teen heartthrob Colten Chase, who attends the Campus Above and appears to be majoring in winning Phoebe’s heart. But when officials learn that Phoebe may be at the center of a startling prophecy, she becomes the target of shape-shifting assassins who will stop at nothing to suppress the truth.

Now Phoebe’s lessons about Shaper’s enemies and spycraft take on great importance as a menace stalks the campus, with Phoebe as its target. Meanwhile, what began as an unlikely relationship with Colten, quickly morphs into heartache when she suspects that something sinister lurks beneath this movie star’s glitter and fame. Suddenly, Phoebe’s caught in a mesh of lies, betrayals, and danger where she doesn’t know who to trust, and needs to rely on herself - and her secret power - to get to the truth and to stay alive.

A school a shape-shifting spies that lurk under a seemingly normal school... Oh yea, I needed to read this one as soon as I heard about it. So I quickly signed up to join the Blog Tour for it. And I am thoroughly satisfied that I did.

I enjoyed all the characters in this read. Phoebe was an interesting lead character and I don't think I ever once found myself annoyed by her, which is hard because most lead characters usually annoy me some how. I even like Colten. Their blooming relationship was okay for me, I don't really like relationships where one person is instantly attracted or only has eyes for the other person, just doesn't seem real to me. But there may be a reason behind this as well... My lips are sealed though, I won't reveal any spoilers for those who haven't read this one yet.

There were a few points in this read were I kind of got a "I am Number Four" feel. Where there are a certain amount of "special" people with powers and a group is out to kill them and they must be protected at all costs, kinda feeling. But it didn't take away or distract from the read because there is still enough difference to it that it didn't feel like a copy of that book, either.

Overall, I really enjoyed this read and would definitely recommend it to other. Nya Jade is an absolute doll and I really look forward to reading more books from her. I can't wait until a sequel for this comes out so I can read where she is going to take up next in this wonderful adventure.

Now it's time for the Author Interview:


First, tell us a little bit about yourself.
Sure! Thank you so much for hosting me today! I'm grateful for this opportunity. I'm a soul/pop singer-songwriter as well as a debut author. A few years ago, I decided to take a break from my hectic music career. But after years of writing songs and performing live shows, my brain and soul needed another artistic outlet. I turned to writing. It's been fun exploring another creative side of me. In terms of something folks may not know about me....Well, I'm a great cook, but I don't enjoy cooking!


1. Have you always know you wanted to be a writer?
I've always enjoyed telling stories and I've done that through the songs I've written. When I started writing my novel, it felt like a natural extension of my creative self.


3. Do you work from an outline, or just sit down and write?
I didn't use an outline for Phoebe Pope and the Year of Four. I had a general idea of where I wanted the story to go, but it took awhile to get into the groove. Even though I have an outline for the next installment, I'm discovering that I'm more of a “sit-and-write” kinda gal.


5. Is there anything in particular that you would like to say to your readers?
You all rock!
I have a great appreciation for all of my readers. I really do. Everyone has shown me such kindness and enthusiasm and I'm humbled by it. There's a link at the end of Phoebe Pope and the Year of Four that will take readers to where they can download free mp3s from my album, The Road To Adam. It's my small way of saying thank you.

What is your favorite: 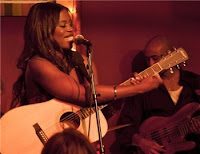 Nya is a soul/pop singer-songwriter as well as a debut author. A few years ago, she decided to take a break from her hectic music career. But after years of writing songs and performing live shows, her brain and soul needed another artistic outlet. She turned to writing. It's been fun exploring another creative side of herself.

Thank you all for stopping by my blog. I hope you have a ton of fun on this Blog Tour. Thank you once again to the amazing Nya Jade for the copy of Phoebe Pope and the Year of Four as well as taking the time to give us this amazing Author Interview. Take care my Lovelies. <3 XOXOXOXO

Fabulous cover and great author interview! I wish I had requested this one of netgalley! I want it so badly.