HI EVERYONE!!!! I am so excited to be one of the stop's for the Blog Tour of Pieces by the very lovely Michelle Davidson Argyle. This Blog Tour is being hosted by Giselle @ Xpresso Book Tours. Today I have the great pleasure to bring you not only my review for Pieces & The Breakaway but also an amazing Author Interview with Michelle. Enough with my ramblings go check out the awesomeness below. 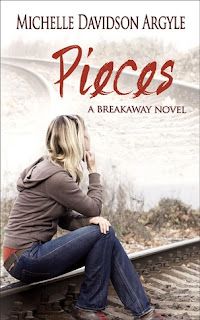 
Staying in love can mean running away...

Two years after watching her kidnappers go to prison, Naomi Jensen is still in love with one of them. Jesse will be released in a few years, and Naomi knows college is the perfect distraction while she waits. But when her new friend Finn makes her question what is right and what is wrong, she begins to wonder if Jesse is the one for her...until she discovers he's out on parole. Naomi must sort through her confusion to figure out where love and freedom truly lie-in Finn, who has no connections to her past, or Jesse, who has just asked her to run away with him.

This was an interesting read for me, yet at the same time I wasn't able to get into it as much as I was hoping I would be able to.

I think the reason I couldn't get into this book as much as I was hoping was for the same reason I couldn't get that much into The Breakaway. Naomi's character is very weak. She doesn't have much of a back bone for herself. She let's other's walk over her and make decisions for herself and she is very indecisive. All of these things together have a tendency to really REALLY annoy me. But despite Naomi there were pieces of this book that I did enjoy.

Like Finn. He was really patient with Naomi. He understood that there are just some things that you can't talk about. He has his own secrets, albeit not as life altering as Naomi's. I thought they were really adorable together, even though I went into this book completely supporting Naomi and Jesse. I have an issue with thinking you should ALWAYS wait for the one you love, no matter how long you are waiting.

She loves Jesse. So how can she possibly find a guy who could get her over him right as he gets out of prison? Jesse obviously loves Naomi as well. I mean after what he did in The Breakaway (letting her go) and then thinking of her and still caring about her after being in prison. That is love.

I won't say what happens because I don't want to spoil it for those of you who haven't read the book, but while I had my issues with this series, I would still recommend it to others. This is truly a book about learning how to let go and move on. About how hard becoming a responsible adult is... about figuring out what you truly need in life and what you only think you need. It's heart wrenching at times, after all... growing up is hard. 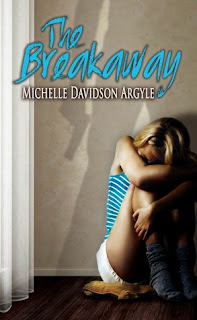 
When Naomi Jensen is kidnapped, it takes her parents two days to realize she's missing. Escape isn't high on her list of priorities when all she has to return to is an abusive boyfriend and parents who never paid much attention to her. For the first time in her life she's part of a family-even if it is a family of criminals. But she's still a captive. In a desperate attempt to regain some control in her life, Naomi embarks on a dangerous plan to make one of her kidnappers think she's falling in love with him. The plan works too well, and when faced with the chance to escape, Naomi isn't sure she wants to take it.

I was thinking I was going to love this book a little more. But there was a lot about it that just didn't grab my attention.

I enjoyed how Ms. Argyle created the connection between Naomi and Jesse (that was forced on Naomi's part at first) that slowly grew into true love. Naomi was trying to get away, but actually falling for the guy hadn't been figured into her plan. But what really got in my way of enjoying what Ms. Argyle was beautifully writing about was Naomi's truly weak characters. Like I mentioned in the review above, Naomi just isn't the strongest of characters. So reading a book, let along two that are from her perspective was nearly torturous for me.

I love Ms. Argyle's writing style I just wish that she would have given Naomi a bigger back bone. She has been kidnapped for crying out loud and she barely tries at all to get away. She lives with these people for a heck of a long time. And when she does finally get away, it's because she is practically let go by somebody that has fallen in love with her. She leads poor Jesse to his disaster (not I support what he was doing, but life leads us all down some rough choices).

I don't want to say to much a ruin either book for those of you who haven't read them, but while it was hard for me to get into them (because of Naomi's characters and the fact that I think I am growing a bit tired of YA literature right now), I would still recommend both of these books to people. They can both be stand alones but I definitely suggest you read one after the other that way you have the background info going into the second book. It will definitely give you a more intensive roller coaster ride.

Ms. Argyle I love your writing style, thank you for both of these beautiful books.

Now it's time for the Author Interview:


First, tell us a little bit about yourself.
I have really weird food tastes. They aren’t weird to me, of course, but everyone else seems to think so! For instance, I’m happy as a clam eating liver and onions, but I won’t touch a carton of yogurt. I even have a hard time putting it in the cart at the grocery store (because hubby and my daughter eat it, blech!). One of my favorite foods is a tomato and peanut butter sandwich (I know, I know), as well as sashimi (raw fish), and any Asian food. You name it, I probably love it. But I won’t eat jam or jelly or any desserts with fruit in them, except apple pie. I have no idea why my tastes are this odd.


1. Have you always know you wanted to be a writer?
I’ve known for a long time, yes … since I was about ten. I used to write stories and bind them together on my own, like a book. I remember reading as many books as I could, but sometimes I couldn’t find exactly what I wanted, so I realized I have to write the books I can’t find.


2. What has been the singularly hardest thing for you to write about thus far in your career?
I think my fairy-tale novella collection, Bonded, has been the hardest thing for me to write. It included a lot of world building, which I’d never done before. I enjoyed writing fantasy, but I think I won’t be visiting it again any time soon.


3. Do you work from an outline, or just sit down and write?
I definitely work from an outline, but it’s very loose. I’m on my ninth book now, so I’m finally getting a method down that works really well for me. Sometimes I end up re-outlining halfway through the book, so I like to keep things very fluid so I can feel an organic growth in the story instead of a forced plot.


5. Do you have any other books planned in the future? If so, what are they about?
Yes, I’m currently writing a novel I’m calling “the country music book” until I have a proper title for it. It’s new adult contemporary. I can’t say much more about it yet, but if you follow my blog, I do regular updates on its progress.

What is your favorite:


Dog or Cat?
Cat! Dogs are too dependent.

Michelle lives and writes in Utah, surrounded by the Rocky Mountains. She loves the seasons, but late summer and early fall are her favorites. She adores chocolate, sushi, and lots of ethnic food, and loves to read and write books in whatever time she can grab between her sword-wielding husband and energetic daughter. She believes a simple life is the best life.

Thank you all for stopping by my blog. I hope you have a ton of fun on this Blog Tour. Thank you once again to the amazing Michelle Davidson Argyle for the copy of both Pieces and The Breakaway as well as taking the time to give us this amazing Author Interview. Take care Lovelies. <3 XOXOXOXO

Thank you for your honest reviews! And thank you so much for being a part of the tour. *hugs*