Book Review: The Book of Life (All Souls Trilogy #3) 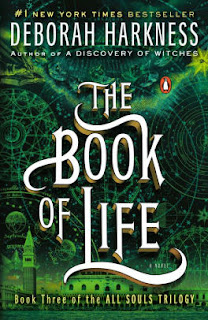 
What did the witches once discover? Why was the secret encoded in a mysterious manuscript called Ashmole 782 and then chased through the centuries by daemons, vampires, and the witches themselves? How can spellbound witch Diana Bishop and vampire scientist Matthew Clairmont fulfill their love and their mission, on contested ground and with the weight of their very different histories pulling them apart?

Diana and Matthew time-travel back from Elizabethan London to make a dramatic return to the present - facing new crises and old enemies. At Matthew's ancestral home, Sept-Tours, they reunite with the beloved cast of characters from A Discovery of Witches - with one significant exception. But the real threat to their future has yet to be revealed, and when it is, the search for Ashmole 782 and its missing pages takes on even more urgency.

Warning: There may be Spoilers below!

To be 100% honest, I wanted to love this 3rd book in the All Souls Trilogy. In the end however, It just didn't fully pan out for me. Was it a good book? Yea, it was okay and had it's shining moments. But it also had a lot of parts that fell flat for me. Once more, just like from the second book, I felt like there were a lot of added elements in this book that didn't fully mesh with the characters that had been created from the first book. As well as elements added to other characters (*cough* Gallowglass's love interest *cough*), that really were just not needed. Also the death of a certain character, just didn't really seem necessary for the story building and felt more like it was done just to bring an element of struggle and or heartbreak to the characters to "show" them the real danger they are in for following the path that they are on. Don't get me wrong, I am not opposed to author's killing off characters in a series, as long as that death truly has a purpose and helps to develop the story along, but this death really didn't serve much of a purpose but to just paint the two killers as more of a villain in the book (though this had already been accomplished in the first book).

By the end of the book, I was also no longer a fan of Matthew at the main male character of the book. I can understand keeping secrets, doing shading things, being over protective and "beast-like" towards your mate/significant other, especially when we are reading a book about paranormal creatures. But the way that Ms. Harkness did it with Matthew's character in 'The Book of Life', made Matthew come across as domineering, prick-like, underhanded and over.. untrustworthy. And while I understand that this in a lot of ways may have been done to really show how Matthew's "blood rage" really affected him, I was also not a fan of the whole "blood rage" idea when it was first introduced in the second book as it so clashed with the Matthew that was painted for us in the first book. It just really made it feel like Ms. Harkness did not fully understand all of her characters as she started writing this series and the farther along she got in writing the series, she just threw in other elements to the characters that she liked in the moment or came up with as the story developed that didn't follow along with what had already been established. Honestly, I was wishing for the "second" guy to get the girl, though of course at this point with Diana pregnant with twins this wasn't going to happen.

I didn't mind the secondary romances that popped up in this book and honestly hope that we get a better look into those romances (beyond the 4th book that I know is out there in the world for Marcus/Phoebe - of which I'd read mixed reviews on as well). Hopefully we get a book for Chris/Miriam (if that pans out) and something for Gallowglass and Fernando and especially Jack. Jack of all the characters in this entire series deserves SO much more happiness then Ms. Harkness has given him so far in this series.

Overall, though there were 3 main points that frustrated me in this series:

1 - The fact that Benjamin was built up as the "ultimate" villain to Matthew and Diana's happiness outside of the Covenant (that conveniently had a member that was a vampire/witch and descendent of Benjamin *eyeroll*) that Diana brought to their side to fight Benjamin. Why was it written in as such a necessity for them to get the Covenants "okay" to bring him down when they had already went against them in everything else (with them being together and having children together)... They are breaking the other "laws", why not break the others? But okay.. Anyways, my issue is that through the 3rd book, he's shown as the main character and a vampire who they have not been able to find in centuries since he was disowned by the de Clermont's... in within a few characters / days of them looking for him, they are able to track him down to his "lair" with his other children, infiltrate and murder his clan and Diana takes it out like it was nothing....

2 - Diana is all of a sudden a badass with her powers and in full control of them... Um.. did I miss something?? Like yea, she got some training when they were in 1590 in the second book, but by the end of that book when they went back to modern times, she was not in full control and still didn't fully understand her power or her firedrake's power. Also, for all intents and purposes, while she understood what controlled her bound magic (courtesy of her parents), she was still bound... how is a bound witch using all of her power like it's nothing??? I thought this was done to prevent a witch from using their power's ever again and yet... here she is using them. What is it??? Because she is this magical "rare" weaver, she's able to get around that rule. And by the end of the book without going through further training or control of her power, she's using it all to defeat Benjamin like it's nothing.... ummmm....

3 - This is my biggest pet peeve of the entire series.... Where's the end??? Or the over all wrap up...? We went through what was originally a TRILOGY, and at the end... SO MUCH IS LEFT UNANSWERED... What happens to Domenico and Gerbert?? Do they get what is coming for them? What happens to Satu, beyond having her power bound? What happens to the creatures as a whole if the Covenant is no longer in control to confine them from "keeping their distance from other creatures??". Is there a cure or fix for blood rage? What comes of dear, sweet Jack!!! I don't know if Ms. Harkness is planning on wrapping up a lot of things in the 4th book or if the 4th book was even planned as this is stated as a trilogy... But honestly if that is the case... why are you using Marcus/Phoebe's book to answer all these unanswered questions from Matthew/Diana's book? Things should be wrapped up in their storyline, that way the 4th book can focus on the story of Marcus/Phoebe and not on things that should have been wrapped up in the prior 3 books.

This series wasn't horrible and I've read a lot worse series then this... But honestly I don't feel like the 2nd two books in the trilogy really held up to the promise that the first book painted. Which is rather disappointing.