Book Review: A Discovery of Witches (All Souls Trilogy #1) 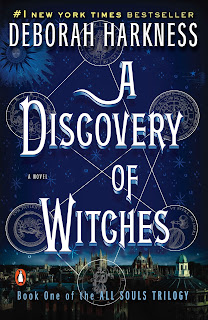 Deep in the heart of Oxford's Bodleian Library, Diana Bishop - a young scholar and the descendant of witches - unearths an enchanted alchemical manuscript. Wanting nothing to do with sorcery, she banishes the book to the stacks. But her discovery has set a fantastical underworld stirring, and soon a horde of daemons, witches, and other creatures descends upon the library. Among them is the enigmatic Matthew Clairmont, a vampire with a keen interest in the book. Equal parts history and magic, romance and suspense, A Discovery of Witches is a mesmerizing and addictive tale of passion and obsession that reveals the closely guarded secrets of an enchanted world.

Opening Sentence: The leather-bound volume was nothing remarkable.

I was first introduced to the All Souls world via Facebook, crazy enough. I kept scrolling past ads for a TV shows that showed magic (and witches) and kept catching my eye. So I finally downloaded the app and paid the small monthly fee and started watching the show. I binge-watched it in one day. Though, this wasn't necessarily a hard feet as it was only 8 episodes long, but I was hooked. And I wanted to know what else this world had to offer me. What can I say, I've always been a sucker for "forbidden" love stories. I knew going into the TV shows that it was a book series, so after loving the shows, I went on Amazon that night and bought the trilogy box set (much cheaper that way).

Then started the waiting game and twiddling of my thumbs waiting for it to arrive.

A Discover of Witches was my first book back into the world of imagination and the magic of paranormal storytelling since the long hiatus I have taken from reading. The last book I had read was back around 2017 (WAY to long for a lover of books and a person who dreams of being a published author... but unfortunately life can get in the way at times).. Anyways, onto the actual review.

I truly enjoyed A Discovery of Witches and the book (of course) went into so much more depth and explaining of the world, then the TV shows could in 8 episodes. Diana Bishop is a witch that is doing everything she can to deny her heritage and focus all of her energy on her academic career and to a certain point she is doing an amazing job of it (or so she thinks). She has a tragic childhood, like most heroines do, but still has a loving support system in her Aunt (and her partner). While Diana is doing research in Oxford, she happens upon a book that will change the course of her life. It is shortly after the events of her finding this book that we are introduced to Matthew Clairmont (vampire) who over the last several decades has been doing DNA research and trying to figure out something vital to him and all creatures (witches, vampires and daemons). Why is it that all creatures are slowly dying out? And wouldn't you know it, Matthew has been searching for the very book that Diana has just so happened upon, a book that many creatures have been searching for... not just for decades, but for centuries. This "spellbound" manuscript may be the very answer to saving all creatures, but it will only appear for Diana, and she wants nothing to do with it.

We come to find that the creatures of the All Souls series do not all get along and/or tolerate each other. There are long histories of grievances between "the races" and even laws against them having "inter-creature" relationship's. However as Diana's and Matthew's paths continue to cross and get intermingled with one another, a friendship is forged. Matthew quickly comes to figure out that there is something different about her and her magic and there is something not quite right (besides his desire of her and her blood... I am hello... he is a vampire... falling in love... we all know how vampires love that blood the most). And while Matthew is slowly convincing Diana to trust and work with him, and protecting her from creatures that mean to use her by force, Diana slowly comes to learn that maybe vampires are not the evil creatures that she has always been lead to believe they are. During this road to friendship, and a few funny/exciting/thoughtful outings together (their first time at Yoga being my favorite), Diana and Matthew come to truly trust one another, and then what do you know... a "forbidden" love is born. And the fight to defend themselves, their families and their right to love one another begins. Because their are a lot of powerful creatures out their aiming to tear them apart and to get their hands on the book that can change their world.

Overall this book was a great first book in the All Souls trilogy. It did a great job of introducing the characters, developing the relationships and building of the story, as well as really showing how the connection between Diana and Matthew turned from one of tentative friendship to that of a raging romance. However, I did feel like once they had committed to each other, it went from 20 to 80 all at once. It was like a slap in the face. I know love can be all encompassing and strong, easily in the beginning but this bordered on obsession territory. However, besides this small fact, Deborah Harkness' take on a world of hidden witches, vampires and daemons living upon us was a gem to read. There were similar parallels from other paranormal books I have read, but there was also enough of a difference to make it feel like a whole new world to delve into. There was plenty of action (some of which were heart-wrenching), especially when Diana was captured and tortured by her own fellow witches. As well as introduces to secondary characters that were relatable and helped progress the story along. I came out of this book truly enjoying it and it's characters and looking forward to reading the second book in the series. There were somethings in the book that didn't make a ton of sense and/or could have been improved upon, but they were minor and did not detract from the overall book.

I would highly recommend getting your hands on this one and getting to know Diana and Matthew, and the world that they live within. And once you complete it, watch the TV series as well. It is definitely well worth the read.