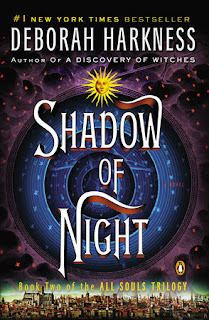 
A Discovery of Witches introduced Diana Bishop, Oxford scholar and reluctant witch, and vampire geneticist Matthew Clairmont. Drawn to each other despite long-standing taboos, these two otherworldly beings found themselves at the center of a battle for a lost, enchanted manuscript known as Ashmole 782.

Book two of the All Souls trilogy plunges Diana and Matthew into Elizabethan London, a world of spies and subterfuge, and a coterie of Matthew's old friends, the mysterious School of Night. The pair's mission is to find traces of Ashmole 782, but as the et of Matthew's past tightens around them they embark on a very different - and vastly more dangerous - journey.

Opening Sentence: We arrived in an undignified heap of witch and vampire.

*Sigh*... What can I say... As much as I really enjoyed reading 'A Discovery of Witches', the first book in the All Souls Trilogy, 'Shadow of Night' the second book in the series, just really was not my favorite. Now, don't get my wrong, there were parts of this book that I did rather enjoy, unfortunately though there were more parts that I really did not like. The biggest misstep for me with this second book in the series is I really did not feel as if it moved the story line along in a fashion that felt genuine to me and it actually worked more for me starting to dislike Matthew's character more then anything. The second reason for them to go to the past besides them hiding was to try and find the manuscript, and it took and yet I was through 2/3's of the book before a real attempt to find the book was even started. Also, I felt like there were a lot of elements that were added to Matthew's character that just really did not mesh with his character that was built up for him in the first book.

The start of the book worked just fine. It made sense for Diana and Matthew to escape to the past and for them to use her ability to time walk as a means for them to hide until she was able to built up her witchy strength and even for them to find some answers about Ashmole 782 that they couldn't find in their present times. It was a lot of events from the middle to the end that I didn't really care for.

And can I say, from the very beginning I did not like Kit Marlowe, which was rather disappointing as I went into this book thinking I was going to like the addition of his character. On top of that, why the hell did his character remain in the book after the first time that he betrayed his "best friend" Matthew. I understand why he did it, jealousy can be a deadly beast especially when its because of someone you "love". But as a vampire is supposedly so dang possessive of his mate/wife, why then did Matthew allow Kit to keep coming around after thy returned to London? I understand not messing up the time line (which was already being done regardless simply by them being in the past), but this allowed Kit to betray Matthew and Diana twice more, with the each one endangering Diana's life even more with each betrayal.

By far my favorite characters in this book, at least as new additions were Phillipe, Jack and Gallowglass (ohhh sweet Gallowglass... by the end of the book he was my favorite character of the series). In the section of the book that Diana and Matthew spent in France at Sept-Tours with Phillipe, I did not initially like the over-bearing character of Phillipe and his need for control over his whole family. However, as the book proceeded it became a lot more clear that he was doing what was best for his family and Matthew and making huge sacrifices to keep them safe. No one is perfect, and Phillipe by far has his faults, but in the end he was able to see farther into the future to do what was needed to protect his family, then even Diana or Matthew could (even with the being from the future). Sweet little Jack.. I loved how Diana gave him a chance and brought him into their little fold of a family in London. In his short life he has obviously experienced a lot of hardships and he deserves to finally have some measure of peace. Though I did have a feeling that we will some how be seeing more of Jack in the next book. He has become to entangled and a part of both Diana and Matthew for him to simply die out in the series. && gallant Gallowglass, being so excepting of Diana from the very beginning and trusting of Matthew (even knowing it was a different version of him then the one that it should have been).

While I understood them being in the past to hide the fact that the majority of the book also excluded the characters of the book that we came to love in the first one was also annoying, especially when the majority of the new characters that were introduced were not that interesting and knowing that they would not be around for the third book (except for a few), made it difficult to get invested in them. By half way through the book I was extremely frustrated with the passing of the book, Diana was supposed to be building up her power as a witch and finding a powerful witch(s) to train her (as well as finding the manuscript) and none of this had even been completed yet. I felt like I learned more about the history of 1590, then the book progressing and more of a story being written. I understand that Ms. Harkness is a historian, but I'm not reading a history book, I'm reading a paranormal romance, that is what I would like to be reading.

There were good parts to this book and I enjoyed Gallowglass and Jack and look forward to seeing how their characters development in the next book. But unfortunately there were more negatives then positives for me in this second book and by the last 100-150 pages I was just reading to get through the book not for the pleasure of the story.